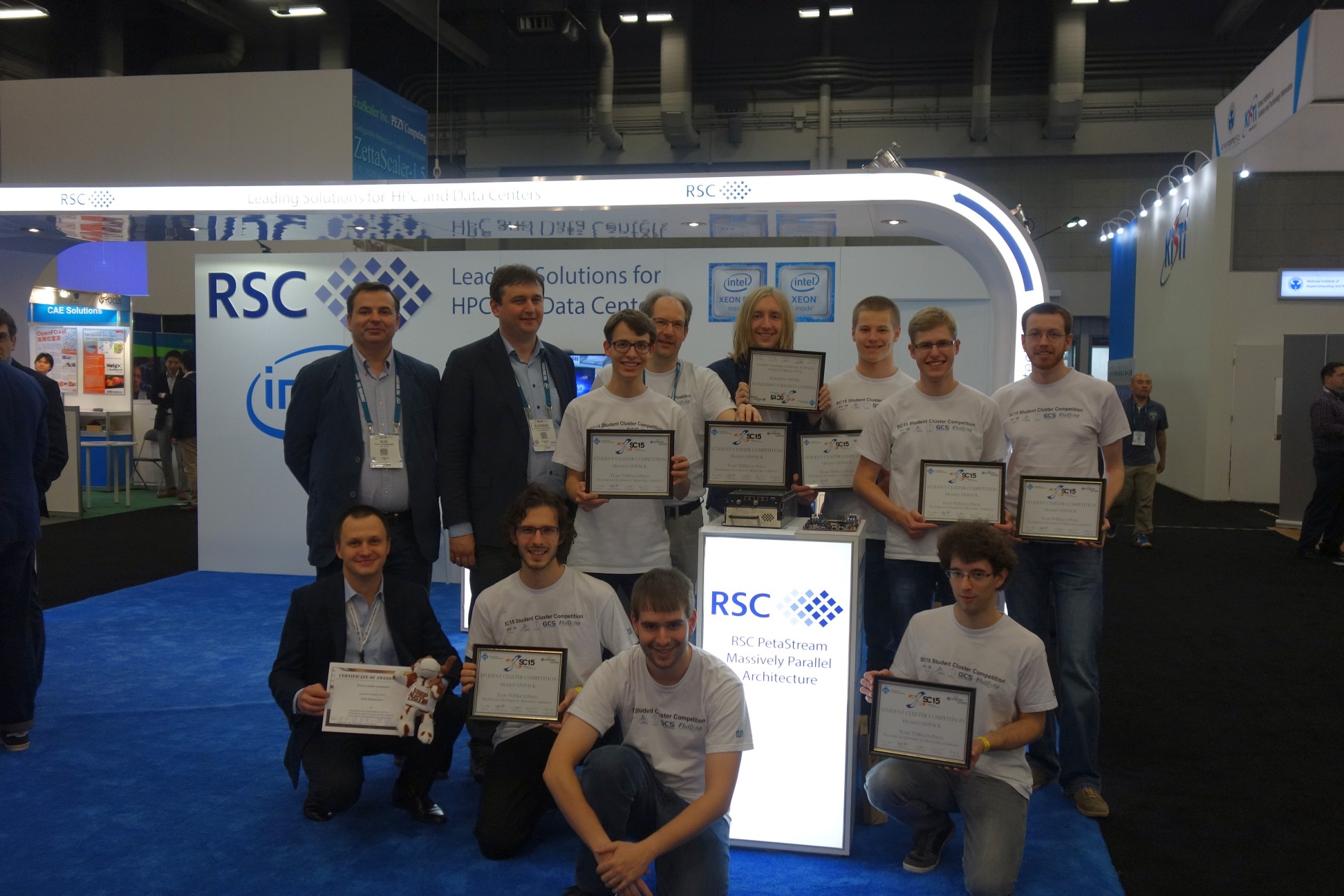 by RSC Group from Russia.

Moscow, 26th November, 2015. — German team TUMuch Phun from Technical University of Munich (TUM) won the Highest Linpack Award in Student Cluster Competition (SCC) held on 16-18th November, 2015 during worldwide supercomputing conference and exhibition SC15 in Austin (Texas, USA). Performance of 7.1 Tflops has been achieved on RSC PetaStream cluster with computing nodes based on Intel® Xeon Phi™. This equipment has been provided as technological sponsorship by RSC Group, the leading Russian developer and vendor of innovative solutions for HPC and data centers. Besides, TUM student team took 3rd place in overall competition within 9 teams participated in SCC at SC15, so as only one European representative in this challenge.

The Student Cluster Competition, which debuted at SC07 in Reno and has since been replicated in Europe, Asia and Africa, is a real-time, non-stop, 48-hour challenge in which teams of six undergraduates race to complete a real-world workload across a series of scientific applications, demonstrate knowledge of system architecture and application performance, and impress HPC industry judges.  The students partner with vendors to design and build a cutting-edge cluster from commercially available components, not to exceed a 3120-watt power limit and work with application experts to tune and run the competition codes.

“We thank RSC Group for their excellent technology support for our team TUMuch Phun during the preparation for SCC. The energy efficiency of their RSC PetaStream cluster with Intel Xeon Phi not only showed the highest Linpack performance in the competition, but also strongly contributed to our remarkable 3rd place overall.” – said Michael Bader, Professor of TUM.

It’s important to mention that TUM was the only one team who used the energy-efficient solution with Intel Xeon Phi, while all other student teams used CPU-only or GPU-based systems. The scope of applications which German team used to run on RSC PetaStream system is:

-       Trinity (a novel method for the efficient and robust de novo reconstruction of transcriptomes from RNA-seq data),

-       MILC (the code is a varied suite of applications designed to study Quantum Chromodynamics (QCD) the theory of Nature's strong force),

-       HPC Repast (agent-based modeling system written in C++ that is useful in social science modeling to understand characteristics of a global population that are difficult to predict based only on the rules that govern the behavior of the agents),

“TUM team’s win of the Highest Linpack Award is one more practical confirmation for very high performance and reliability of RSC PetaStream massively parallel architecture which also provides the best energy-efficiency. We are very proud that our server equipment, software tools for cluster management and technological support provided from RSC side helped to achieve such high result in Student Cluster Competition,” – commented Alexander Moskovsky, CEO of RSC Technologies (RSC Group).

High speed communication network based on:

The total power consumption for all computing equipment was not exceeded 3kW.

In addition to the TUM team from Germany, the SC15 Student Cluster Competition line-up included other student teams from around the world: