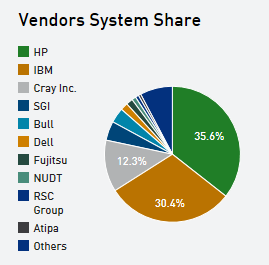 For the first time, the Top500 list (November, 2014) contains two systems developed by RSC for one of the most innovative and the most powerful supercomputing centers in Russia at the St. Petersburg State Polytechnical University (SPbSPU). Polytechnic RSC Tornado made the first hundred of the Top500 taking 81st place with LINPACK performance of 658 Teraflops. New SPbSPU supercomputing cluster based on the RSC Tornado architecture with direct liquid cooling has the peak performance of 829 Teraflops. It is the first project in Russia and CIS based on the newest Intel® Xeon® E5-2600 v3 server processors.

A unique feature of RSC PetaStream is the massively parallel architecture based on Intel® Xeon Phi™ enabling execution of up to 250,000 parallel threads on 1024 computing nodes based on x86 architecture in a single cabinet taking just 1 sq.m. The RSC PetaStream massively parallel architecture holds the world records of computing and power density as well as by compactness. RSC PetaStream implements an innovative subsystem based on the leading industry standard of 400V DC power developed in cooperation with Emerson Electric. This subsystem enables power distribution efficiency over 90% improving overall energy efficiency of the system, reduction of operating costs and overall reliability of the complex.

Total peak performance of the new SPbSPU supercomputing center after its commissioning planned for 2015 will exceed 1.1 Petaflops.

133th position of the rating is held by MVS-10P supercomputer with peak performance of 523 Teraflops that has been deployed two years ago at the Joint Supercomputer Center of the Russian Academy of Sciences (JSCC RAS).

190th position in the Top500 list is taken by the RSC Tornado SUSU computing cluster with 473 Teraflops peak performance that has been running in South Ural State University (SUSU) in Chelyabinsk since 2009.