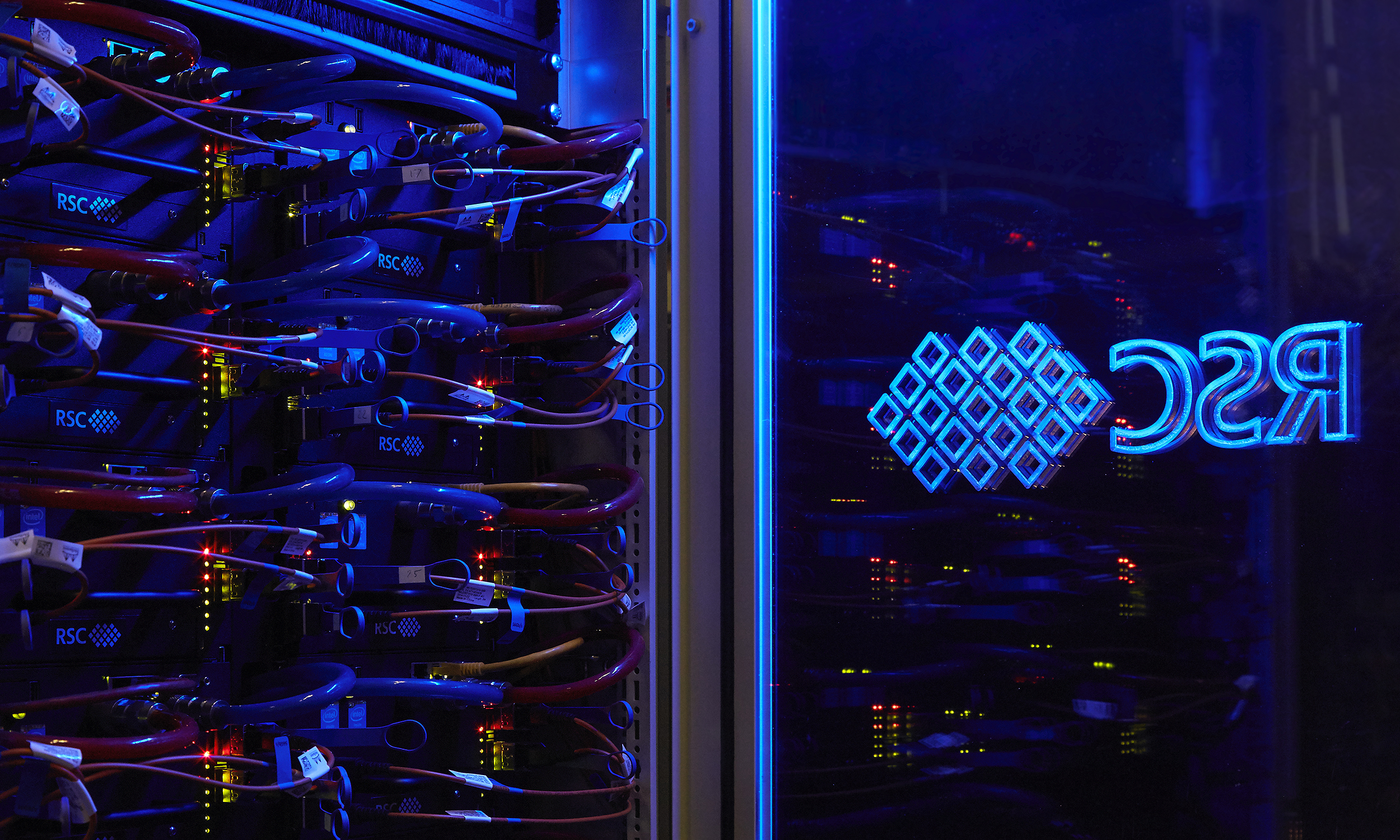 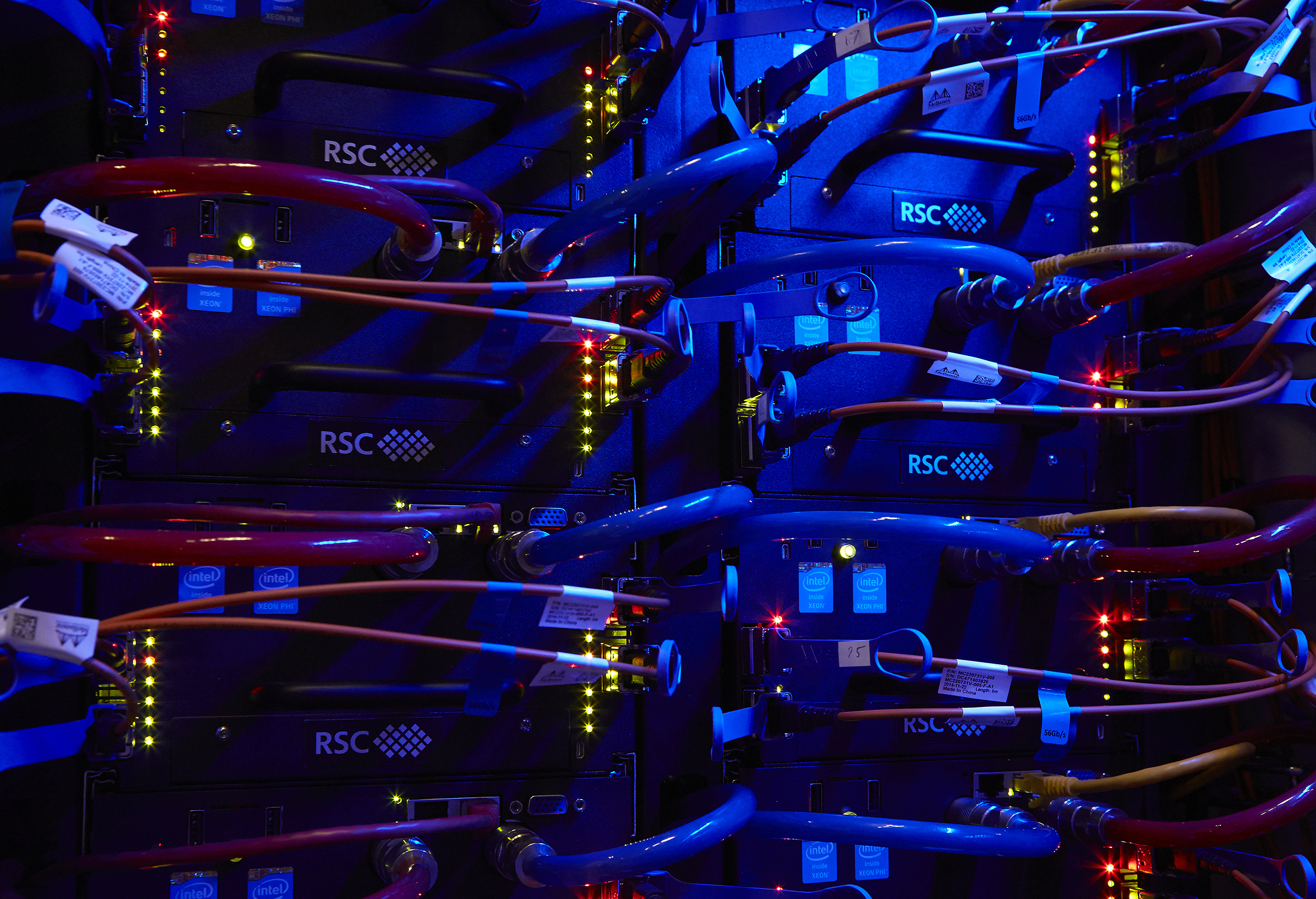 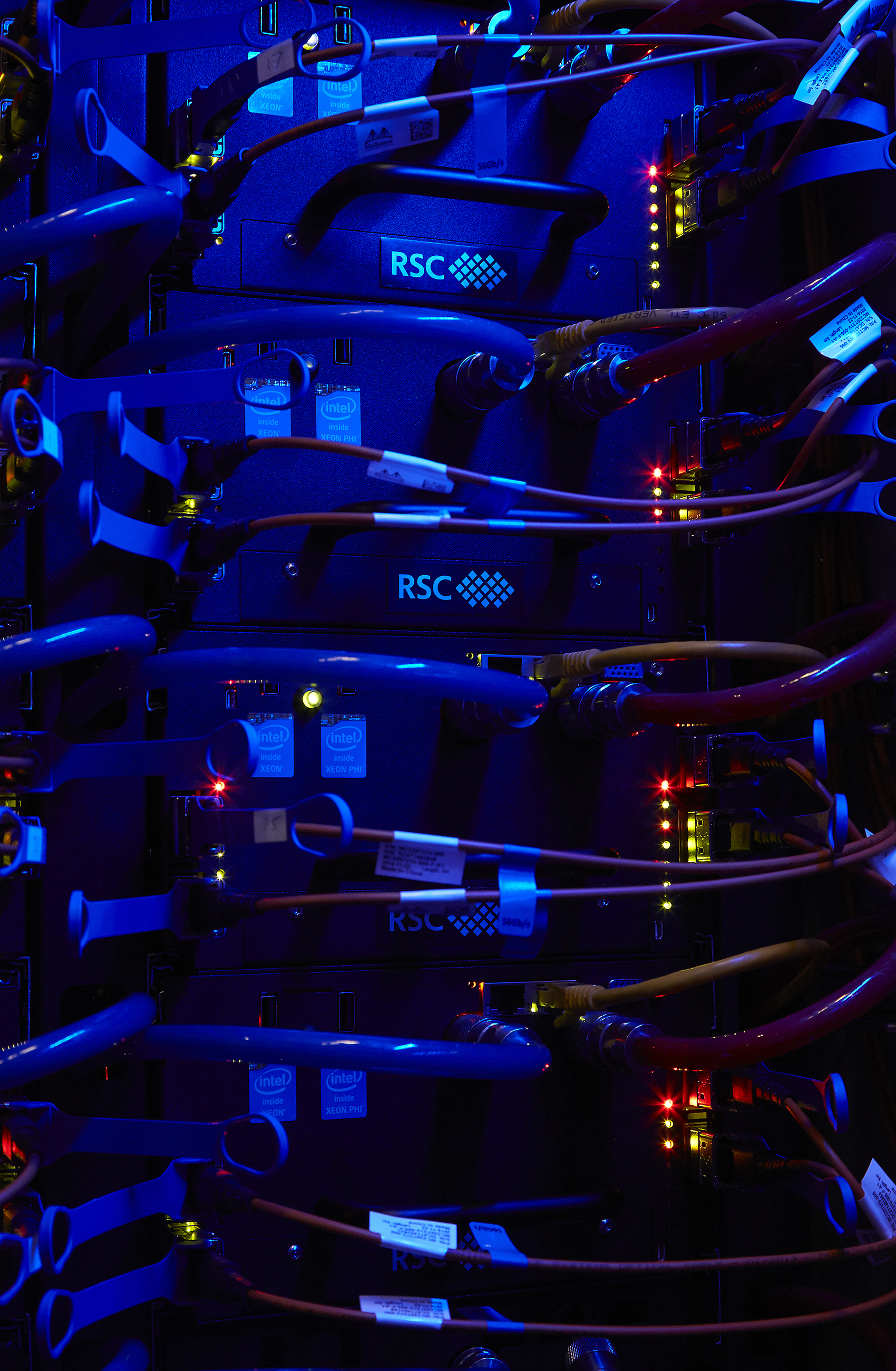 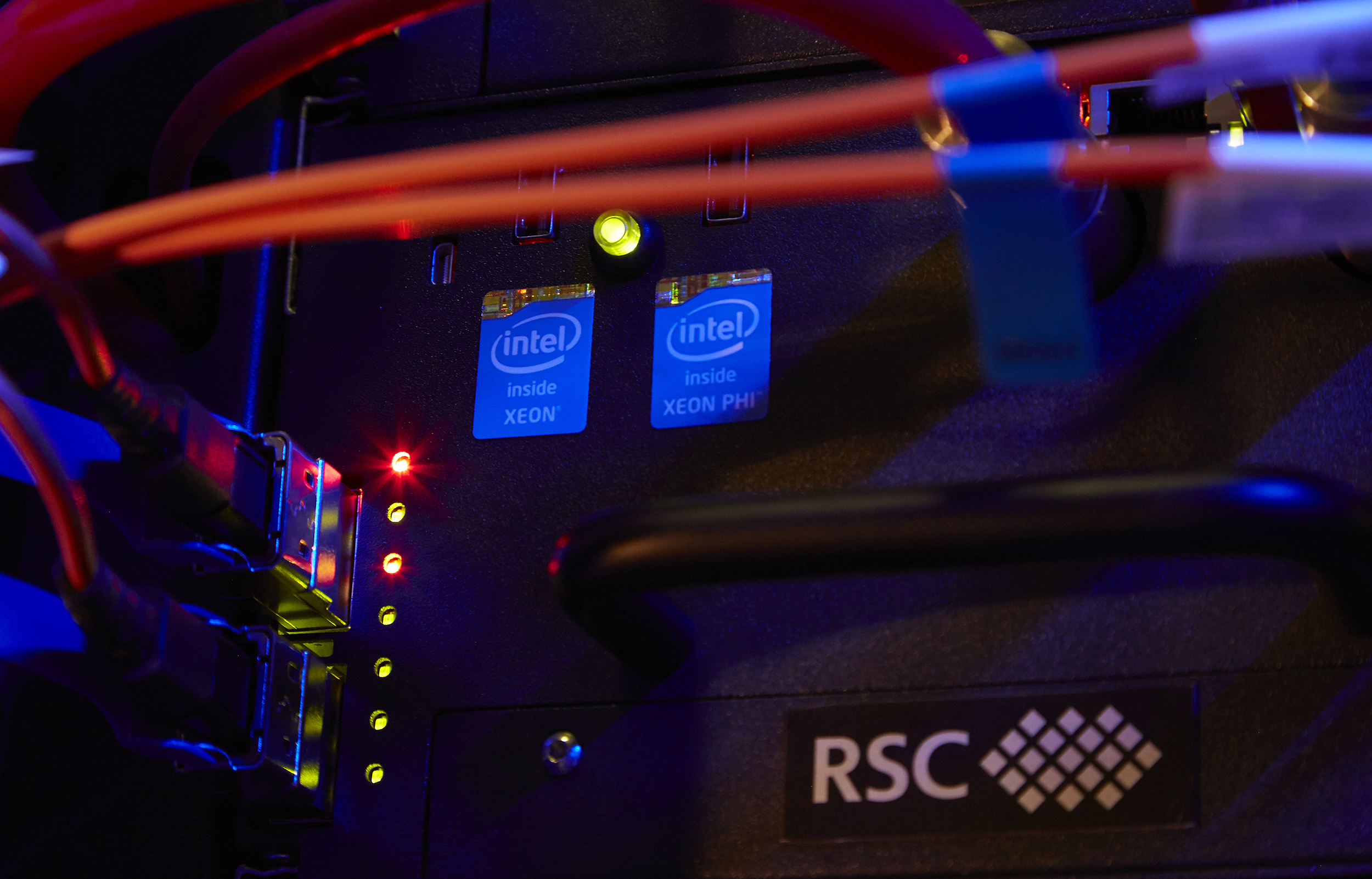 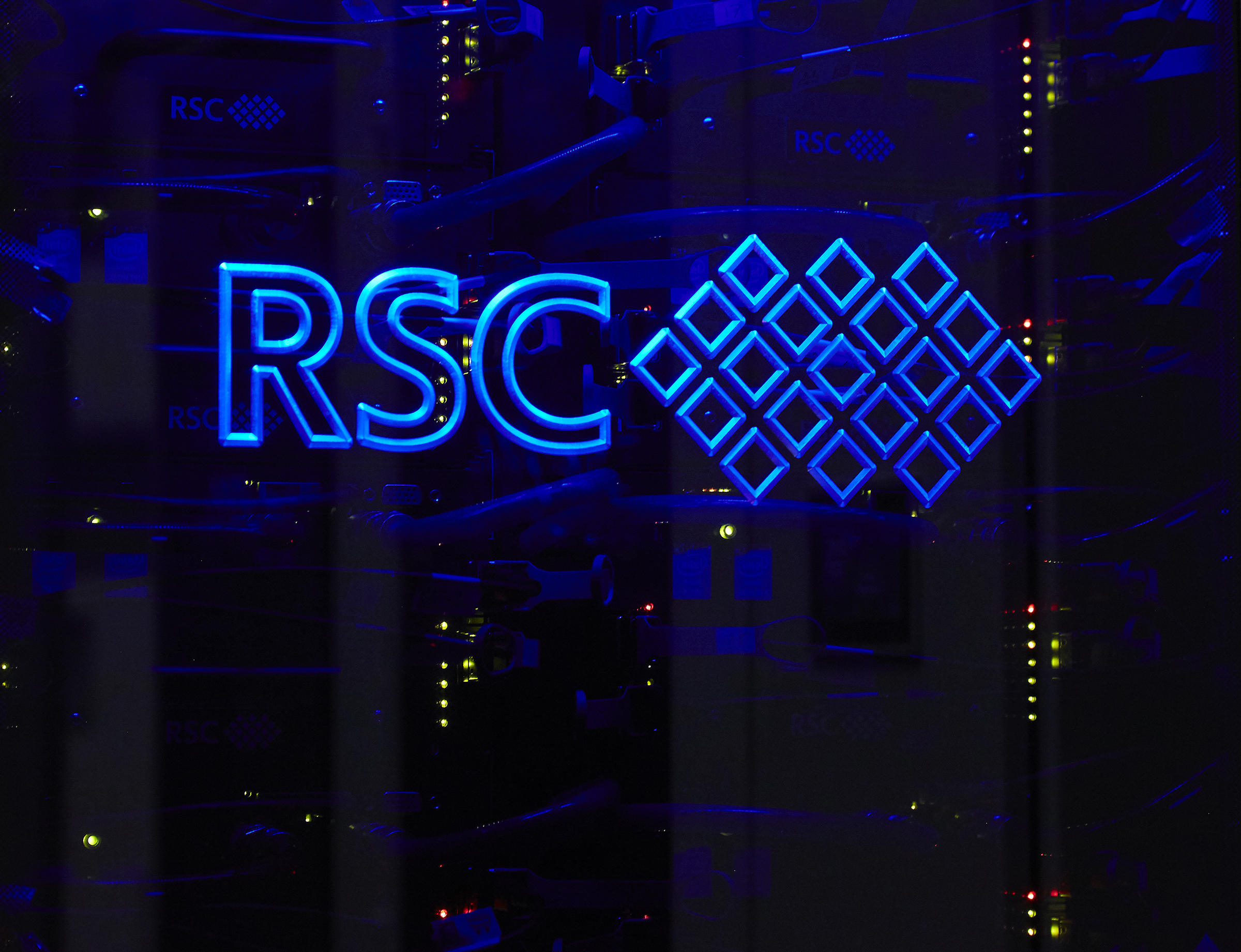 Moscow, April 15th, 2015.  — RSC Group, the leading developer and system integrator of innovative solutions for high-performance computing (HPC) and data centers in Russia and CIS, has announced completion of deployment of a new MVS-10P MP supercomputer based on massively parallel RSC PetaStream™ architecture at the Joint Supercomputer Center of the Russian Academy of Sciences (JSCC RAS). It is the first project in CIS based on the highest-performing Intel® Xeon Phi™ 7120D coprocessors. The MVS-10P MP supercomputer holds 20th position in the new edition of the Top50 list of the most powerful computing systems in Russia and CIS (published on March 31st, 2015).

The new MVS-10P MP system has expanded JSCC RAS computing resources that are still based on MVS-10P supercomputer build on RSC Tornado cluster architecture. This system deployed by RSC in 2012 still occupies the 4th position at the local Top50 list. The total performance of liquid-cooled RSC supercomputers at JSCC RAS now exceeds 600 Teraflops.

The Joint Supercomputer Center of the Russian Academy of Sciences (JSCC RAS) has been opened in 1996 (has branches in St. Petersburg and Kazan) and is one of the powerful joint supercomputing centers in Russia in the field of science and education. JSCC staff includes qualified scientists, programmers and engineers. JSCC provides its services to over 100 organizations; 181 research groups work in the center on more than 900 tasks in fundamental and applied areas.

"With such solution as MVS-10P MP massively parallel system based on the latest RSC PetaStream architecture, employees and scientists of numerous RAS research institutes and organizations can develop and optimize applications for future systems with massively parallel architectures and new multi-core processors. This includes such priority areas as development of mathematical model and program algorithms for extra massively parallel systems and pilot scientific and technological tasks. Russian scientists will be able to perform large-scale research in numerous key fundamental and applied knowledge areas that was previously impossible. This will inevitably assist further active development of Russian scientific and economical potential," – said academician Gennady Savin, Director of JSCC RAS.

It should be noted that massively parallel RSC PetaStream™ architecture has been developed in Russia and systems based on it are produced at Russian manufacturing facilities.

The RSC PetaStream™ architecture is distinguished with massively parallel concept providing execution of up to 250,000 parallel threads on 1024 x86 computing nodes in a single cabinet taking only 1 square meter of space. RSC PetaStream™ set the world records of computing density (1.2 Petaflops per cabinet), power density (over 400 kW per cabinet), performance per volume (over 560 Teraflops/m3) and the smallest footprint.

"We continued expansion of computing infrastructure at JSCC RAS, which has one of the most innovative supercomputer facilities in Russia, and this enabled us to deploy a new MVS-10P MP system based on revolutionary ultra-density massively parallel RSC PetaStream solution with high-performance Intel Xeon Phi 7120D co-processors. It should be noted that RSC Group was the first in the world to provide a complete solution based on this Intel product and now it is the first in Russia and CIS with a project of such grade," - said Alexey Shmelev, RSC CEO.

"The provided RSC solution based on Intel architecture enables users to run existing applications requiring high level of parallelism and create new applications without rewriting the code. All programs running on RSC PetaStream will be fully compatible with next-generation Intel Xeon Phi architecture code-named Knights Landing with over 3 TFLOPS computing power per socket, integrated support of new generation Intel Omni-Path interconnect network, increased memory size per core and a number of other revolutionary innovations. All these features will improve the efficiency of solving scientific, financial, engineering and other problems with better performance of each supercomputer node," - said Dmitry Konash, Intel Regional Sales Director in Russia and CIS.

RSC PetaStream™ solution based on x86 architecture that is a de-facto industry standard throughout the world provides protection of investments in software development and optimization. The developers will be able to use existing programming model in new software for future computing systems thus getting the opportunity to run existing applications on Exascale level supercomputers. At the same time, flexibility of RSC PetaStream™ architecture enables testing of innovative programming models that might be more efficient for Exascale computing.

Energy-efficient direct liquid cooling technology developed by RSC is tested with time and has been used by customers in numerous projects since 2009. It provides very high energy efficiency demonstrated by RSC PetaStream™ solution also. According to measurement results for several RSC systems operated by customers, average Power Usage Efficiency (PUE) is 1.06. It means that no more than 6% of power is used for system cooling. PUE is a critical factor for Exascale level supercomputers with power consumption level of several dozen megawatts.

RSC PetaStream™ implements an innovative subsystem based on the leading industry standard of 400V DC power developed in cooperation with Emerson Electric. This subsystem enables power distribution efficiency over 90% improving overall energy efficiency of the system, reduction of operating costs and overall reliability of the complex.